Lovebirds also lnown as African love birdsoriginate from africa and its adjacent islands.   Lovebirds are active, cheerful and beautifully decorative. These petite 'pocket' parrots are very intriguing! Lovebirds come from the drier regions of Africa. Because they evolved from a very harsh environment, they are very suited to captivity. Not only do they have a good disposition, these charming, brilliantly colored little pets are very hardy.

Lovebirds are 13 to 17 cm in length and 40 to 60 grams  in weight. They are among smallest parrots, characterized by a stocky build, a short blunt tail, and a relatively large, sharp beak. Wildtype lovebirds are mostly green ...

lovebirds can hav and ll not get sick from.

Lovebirds areactive birds. When housing your lovebird, bird cages or an aviary best suited to them must provide a lot of space.

Lovebirds should be fed a varied diet consisting of seeds and  pellets, Breeding age hens should be placed on a calcium supplement to counteract the nutrients that they lose during egg-laying.
Egg lying:
Female Lovebirds will lay their eggs between 5 - 12 days after mating. Many will lay an egg every other day until they have all been laid. Each clutch usually contains between 3 and 7 eggs.
Incubation Time:
Lovebirds incubate their eggs for about 23 days. This can vary by a couple of days in either direction. When attempting to calculate future hatch dates, always count forward from the day that you notice the hen begin to sit on the eggs.
Hatching Care and Wearing:
Most breeders will allow hen to feed the babies from hatching to the age of 2 ,3 weeks. From that, they will pull the babies out of the nest and place them in a rooder  for handfeeding. Most Lovebirds need to be handfed until they are between 6 and 8 weeks old.

Their average lifespan is 10 to 15 years. 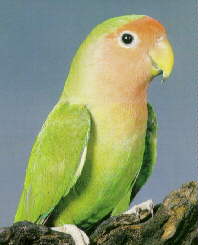 There are nine known species of Lovebirds.

Peachfaced Lovebirds are most commmon one kept in captivity. This is an best spicy for biginners for breeding.Peachfaced originate in Southwestern Africa in and around Namibia and Angola.Peachfaced mutations, allowing well over 100,000 possible color combinations.They are fairly common and secure in their natural range.

Peachfaced are the largest species of Love Bird, typically weighing in at from 50-60 grams.The wings and back are dark green, with a lighter green color on the lower breast. flight feathers have dark green on the leading edge, darkening to black near the wingtip, with the trailing edge of the primaries mostly black. The face is a bright red/orange color which gives these birds their name. 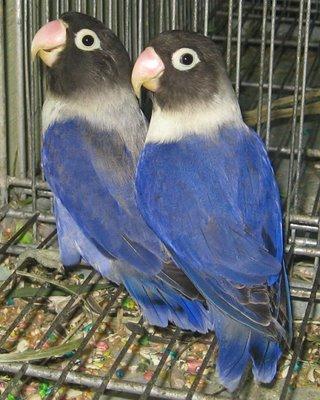 Masked Lovebirds are also called Yellow-Collared or Eye Ring Lovebirds.Yellow-collared Lovebird is a mainly green small parrot about 14.5 cm (5.5 in) long.They are native to northeast Tanzania. Its upper parts are a darker than its lower surfaces. Its head is black, and it has a bright red beak and white eyerings. Male and female have identical external appearance.

White eye ring lovebirds are usually more agressive than peachface lovebirds and thats why not suggested to keep along with peach faced lovebirds. They are also called as Persontus family of Lovbirds.Many mutations have been discovered some are Cobolt, Violet,Blue Masked,Black Masked,Mouve etc. 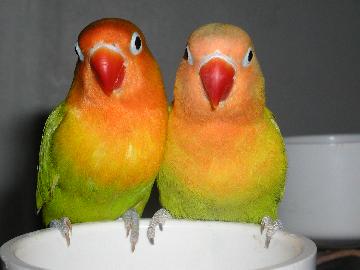 green back, chest, and wings. Their necks are a golden yellow and as it progresses upward it becomes darker orange. The top of the head is olive green, and the beak is bright red

They have normally white ring around their eyes often called Ringed Eye.While most Fischer's Lovebirds are green, several color variations have been bred. The blue variation is predominant; lacking yellow, it has a bright blue back, tail, and chest, a white neck, a pale grey head and a pale pink beak.

Lutino (a mutation that is yellow in color), pied, black or dark eyed white, cinnamon, white, and albino mutations have also been bred. Fischer's Lovebirds, like many captive birds, can suffer from feather-plucking if they get bored or stressed. This is more likely to occur with single lovebirds than those kept in pairs or groups. To prevent this, the lovebirds should be provided with a wide array of toys to play with and chew on. 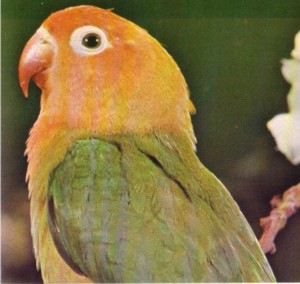 This, and the remaining species all possess a ring of feather free, white skin around each eye, giving rise to the term the white eye-ringed group. The Nyasa Lovebird is found in parts of Zambia Malawai and Rhodesia. The sexes are similar in appearance. The back and wings are dark green, the underside lighter with a yellowish tinge. The head, neck and breast are a bright orange-red more vivid on the head, merging into yellowish on the breast. The beak is red, the feet and legs gray and the irises brown. Hens are said to be darker in color than the cocks.

The Nyasa Lovebirds is often mistaken for the slightly larger Fischer's Lovebird  which has an olive-green hood and a blue rump. It is also broadly similar to the Peach-faced Lovebird  which has more clearly demarcated orange colouration, and lacks a white eyering. 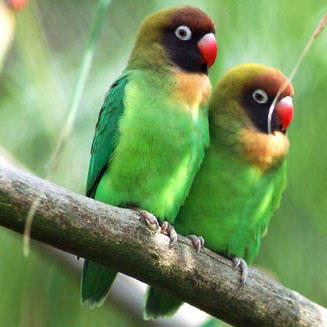 The Black-cheeked Lovebird is 14 cm in length, with mostly green plumage, reddish-brown forehead and forecrown, brownish-black cheeks and throat, orange bib below the throat which fades to yellowish-green, white eye-rings and grey feet.

The Black-cheeked Lovebird inhabits deciduous woodland, where permanent supplies of surface water exist, as it needs daily access to water. In the dry season, these birds may congregate in large flocks of up to 800 or more.

It is listed as a vulnerable species since it has a small population which is in decline due to continuous habitat loss.

The Black-cheeked Lovebird is relatively easy to breed in aviculture, but there was little interest in breeding them during the first half of the twentieth century at a time when imports were numerous. Now they are uncommon in aviculture and uncommon as pets.

The Black-cheeked Lovebird feeds mainly at ground-level on annual grass seeds, but also on other vegetable matter and insect larvae, and on corn, sorghum, and millet. 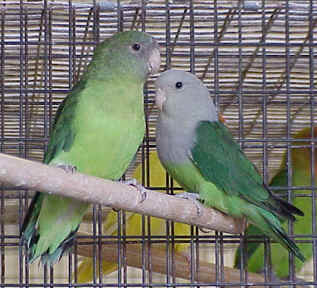 Madagascar Love Birds are the only Love Bird species which does not originate on the African continent. Maddies come, not surprisingly, from the island of Madagascar, which lies off of Africa's Southeastern coast.

Madagascar Lovebirds are the smallest species of Love Bird, typically weighing in at only 30-35 grams.Madagascars are strong fliers, and when open, their wings seem larger in relation to their bodies than those of the Peachfaced.

Madagascar Lovebirds are one of the few species of Love Bird that are sexually dimorphic. Hens are entirely green and black, with dark green on the back and wings, bright green rump and paler green breast.The males are similarly colored, except that their entire head and upper breast are a soft pale grey.

Madagascar Lovebirds are quite rare kept as pet only a very few breeders having successfully reproduced more than one or two generations. 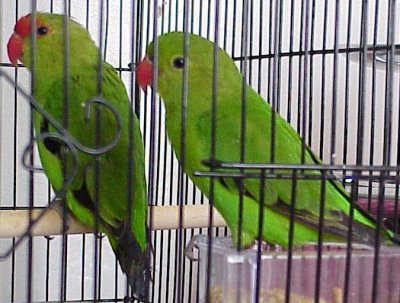 One of the "rares," this is the largest of the Agapornis species and is generally not seen as a pet. This species is dimorphic, meaning the male and female can be identified visually. Abyssinian Lovebird is also known as black-winged-lovebird. Also eat insects.

This species is found in equatorial Africa, ranging from Sierra Leone to Lake Albert in Uganda. In the west of it's range it extends down as far as northern Angola. The cock has a bright green body, verging into yellowish on the underparts.

The forehead and face are bright orange-red and there are black flight feathers. The rump is blue and 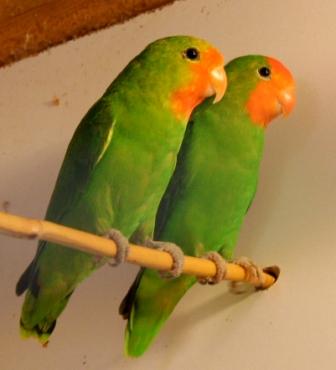 there are small amounts of red, yellow and black in the tail feathers. The beak is red , the feet and legs are gray and the eyes are brown. The hen is similar in color but paler. Rarely ssen as pets and their export is restricted from native land.

Known as very shy bird they donot breed in captivity.. They require certain native fig seed or fig flesh as a basis of their daily diet, and without these vital dietary necessities they do not normally thrive or breed well in captivity. 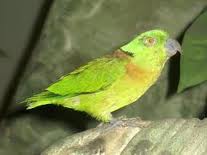 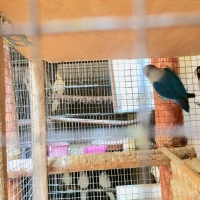 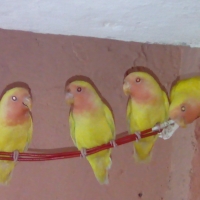 2 Pairs of LOVE Birds For Sale
Lovebirds LAHORE
i am selling 2 pairs of lutino love birds. Original images attach. price of one bird is Rs.1000... 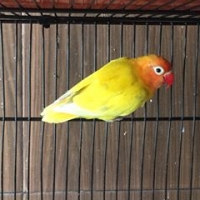