The American pitbull Terrier  is a medium-sized, solidly built, short haired dog whose early ancestors came from England and Ireland. It is a member of the molosser breed group.

History: During the 19th century,England,Ireland, and Scotland began to experiment with crosses between bulldogs and teriers, looking for a dog that combined the gameness of the terrier with the strength and athleticism of the bulldog.

The American Pit Bull diverges in appearance from the Staffordshire Bull Terrier, having less bulldog traits in the face and body. The American Pit Bull is medium sized, having a short coat and smooth well-defined muscle structure, but should never appear bulky or muscle-bound. Its eyes are round to almond shaped, and its ears are small to medium in length and can be natural or croped. The tail is thick and tapers to a point. The coat is glossy, smooth, short, and slightly stiff and can be any color except merle. The breed ranges from a height of about 14 to 24 in (36 to 61 cm) at shoulders, and weighs between 30 and 90 lb (14 and 41 kg).

Red-Nosed Pit Bulls must be well socialized when they are young. They excel at obedience, tracking, and agility training.

The Pit Bull diet should contain beef, poultry, brown rice, and corn. This breed needs lots of fiber and few carbohydrates. Essential fatty acids are good for the Red-Nosed Pit Bull's coat. Red-Nosed Pit Bulls shed moderately, so they require regular brushing. Baths should be given as needed. Red-Nosed Pit Bull owners sometimes have their ears clipped, but it is not customary to do so.
Annual checkups are recommended, with vaccinations as follows:

The APBT is a breed that is loyal to friends and family, and is generally friendly towards strangers. Many have strong instincts to chase and seize cats and other fleeing creatures, including deer and livestock (prey drive). As with any dog breed, proper training and socialization at an early age is a must. According to the UKC, "aggressive behavior toward humans is uncharacteristic of the breed and highly undesirable.

Though the pit bull type dogs were all created with similar crossbreeding between bulldogs and pit terriers, each individual breed within the type has a somewhat different history. There are an estimated 77.5 million owned dogs in the United States; however, the number of pit bull-type dogs has not been reliably determined.

Please Note: The APBT ranges in size from 22 pounds to 110 pounds (rare), with the most common being between 35 - 55 pounds (16-25 kg.), in fact the original APBT's were between 20 - 40 pounds (9-18 kg.) and were bred small for their main purpose, fighting, These dogs are varying from small to extra large.  A very common misconception is that APBT's are muscle bound (viscous) hulks that weigh in around 85 pounds (39 kg.) and this is generally not the majority, Most of the APBT's that Are that large have been crossed with another breeds.A generally healthy breed, although some are prone to hip dysplasia, hereditary cataracts, allergies to grass and congenital heart disease.Pits will do okay in an apartment if it is sufficiently exercised. They are very active indoors and will do alright without a yard provided they get enough exercise. Prefers warm climates.

Developed from the Bull and Terrier types of yesteryear, the American Pit Bull Terrier was originally bred as an all around farm dog, working the farms as a cattle/hog dog. Some chose to turn their talents into the sport of pit-fighting. The breed's tenacity and accompanying strength are unmatched in the canine world. As rich and captivating as the breed's history is, the Pit Bull's future is more worthy of commentary. Some proponents of the breed argue that this breed is the original bulldog of the past. Old prints and woodcarvings show reason to believe this. They show dogs that look exactly like the breed today, doing things the dog is still capable of doing.  For more information on this theory you can read books by Richard F Stratton. The APBT, as registered by the UKC, is an individual breed of dog and does not refer to just any ill-bred, mindless warrior-type mongrel. At one time, the Pit Bull was a much loved, trustworthy companion. People who chose to train these dogs to fight are chiefly responsible for the banning and witch-hunting that has been sweeping the U.S. 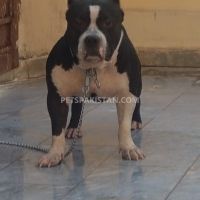