One of the world's most famous birds is the cockatiel which is well known for its gentle, social and intelligent nature.Cockatiels are originally found in Australia and  as the is smallest of the cockatoo (parrot) family.There are many simalarities in Cackatoos and Cockatiels.By their very nature itself these cockatiel birds are very sociable and moderately active and they like to be touched, played and talked to.

they would love to get stocked and cuddled and can be trained to talk and whistle. It's normally the male cockatiel that is the best at whistling and singing. They use their vocal skills to attract females in the wild so they are generally better at it.The most common colors in Cockatiels are  Grey,Charcaol Grey and white. There are many successful mutations of Cocktiels evolved.

Cockatiels feed o a variety of grass seeds, nuts, berries and grain. They may feed either on the ground or in trees and always in small to large numbers. Cockatiels roost in trees near water.

Males tend to have  brighter facial color. Females have  duller facial color, and have barring under their tails. Some breeders say this general sexing rule is not always tru

Breeding:Cockatiels may breed at any time  in response to suitable periods of rain  especially in the more arid regions.

Cockatiels are hookbills ,and as such,  should be fed a varied diet consisting of seed, high quality pellets, and plenty of fresh fruits and vegetables.

Female Cockatiels will lay their eggs within 3 weeks of mating.  Like many other types of birds, it's not uncommon for Cockatiels to lay one egg every other day until they have all been laid.

On average Cockatiels incubate their eggs for about 20 days.
Subtypes:

The gray cockatiel is the most common type of cockatiel. The male normal has dark gray feathers over his entire body, excluding the white wing stripes, yellow face, and orange cheeks. This is seen as the natural "wild" coloring of cockatiels in Australia today.

The cinnamon cockatiel has developed a gene mutation which has turned its gray feathers into a light brown. The color of these birds can range from a very light brown to a rich chocolate brown.

Lutino Cockatiels can either be totally yellow or totally white with a yellow head and bright orange cheeks. Lutinos usually have red or maroon colored eyes and their cheeks are extremely pronounced.

Pearl Cockatiels have a distinct "brushed" effect on their wings and back. This can be seen above with gray and white feathers mixing in a criss-cross pattern.

The White Faced Cockatiel is arguably the most beautiful of all the cockatiels. It's lovely contrasting white and dark plumage is extremely pleasant to look at and adore. The lack of yellow and orange pigment in their blood denies these birds from developing the normal yellow & orange heads of the normal cockatiels. 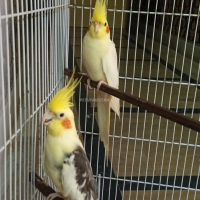