Amazon parrots, commonly referred to as the 'Amazons', are medium to large parrots belonging to genus Amazona. They were scientifically described for the first time by naturalist Rene Primevere Lesson in the 1830's. Various members of the Amazona group were later scientifically described by several naturalists. These naturalists, in about the 20th century, wanted to have their names associated with these species, though reportedly without any further evidence or specimens than the earlier descriptions.

About  50 years or even longer with good nutrition and care.

Range from about 10-20 inches in length.

Amazons are extremely intelligent and playful birds that love being the center of attention. They need lots of affection and time with their owners, and they are curious athletic, and seem to enjoy entertaining their owners with clownish antics. However, they are also considered somewhat moody and can become fairly aggressive.

Environment:
Amazon parrots originate from South and Central America, and a few
CaribbeanIslands. There are approximately 27 species, and many
subspecies..

Being very playful, Amazons need lots of sturdy toys. Amazons particularly seem to enjoy toys they can manipulate with their feet.

The Amazon parrot is native to the New World ranging from South America to Mexico and the Caribbean.

Amazon Parrots lean toward having vitamin A and calcium deficiencies. You should provide no more than 20 to40% of their diet with top quality pellets.

Breeding:
The breeding season for Amazon parrots typically starts in spring (April or
May) and continues through the summer.

Sexual maturity for most is between 4 and 5 years of age. The female will lay between two and four
eggs, incubating them for an average of 26 to 28 days.

Activities
Exercise and play are important activities for the physical well being and psychological health of your parrot. These activities help deter distress and prevent the problems of screeching and feather picking

All Amazon Parrots are loud at some time. Most are loud at sunrise and sunset, and when you aren’t giving them the attention or item they want. If you provide lots of toys for them to destruct and play with, and change them out often it will help 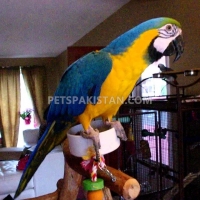 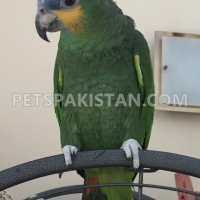