The Bengal breed originated as a human-made hybrid of the Asian leopard cat and the domestic cat. The leopard cat (Felis bengalensis ) is a cat-sized inhabitant of southern Asia and is thought to be one of the closest of the modern undomesticated cat species to the ancient common ancestor of the cat family.

The leopard cat looks very much like a domestic cat, except for the larger, snapping eyes, pronounced whisker pads, longer legs, and brilliant leopard markings. It looks, in fact, like a miniature leopard. The Bengal began its journey toward becoming a recognized breed in 1963 when breeder Jean Mill of Covina, California, bought a female leopard cat from a pet store. At that time, leopard cats could be purchased in the United States, although today it?s illegal to sell them. She wasn?t trying to create a new breed of cat?she just wanted a unique pet.

Hisory[:After several years, Mill thought the cat looked lonely, so she put a male domestic cat in the cat?s cage to keep her company. She wasn?t expecting a romantic relationship, but to Mill?s surprise, in 1965 her leopard cat produced a litter.

Only one kitten from the litter survived, a female hybrid that Mill named Kin-Kin. Mill contacted Cornell University College of Veterinary Medicine in Ithaca, New York, for advice on how to handle the hybrid, and was told that Kin-Kin was probably sterile. That, also, proved false. Kin-Kin grew up, mated with her father, and produced two kittens. One was all black and had inherited the wild leopard cat temperament?it refused to let anyone near it. The other, a spotted male, inherited the sweet disposition of a domestic. After some consideration, Mill decided that creating a crossbred breed would benefit the plight of the leopard cats. Mill was dismayed by the plight of orphaned leopard cat cubs taken by hunters and sold to American pet stores. The cats generally ended up in zoos when the cubs grew to adulthood and reverted to their wild ways. Mill wanted to provide the American market with an acceptable spotted substitute.

In the first crossings of leopard cat to Domestic Shorthair, the male kittens were infertile, as is the case with many hybrids. The females were usually fertile as were the male kittens in subsequent generations. However, many of those first hybrid kittens grew up to be nervous cats of uncertain temperament, similar to their wild relatives. It was only after the cats were several generations away from the leopard cat that the Bengal?s temperament became more predictable.

Standard: The standard for the Bengal, unlike other cat breeds, includes a description of the cat?s ideal temperament, describing it as confident, alert, curious, and friendly. Any sign of definite challenge disqualifies the cat in order to prevent temperament problems from being perpetuated in the breed,ling stock. TICA requires that show cats be bred Bengal to Bengal for at least four generations to ensure a docile temperament.

However, in some associations the Bengal is still considered the party crasher at the cat fancy cocktail party. The CFA does not accept any breeds with wild blood and only five associations (TICA, CCA, UFO, TCA, and CFF) allow Bengals to be shown. ACFA accepts Bengals for registration but does not allow them into the show halls because of concerns about the temperament of the breed. Reported concerns include extreme timidity, aggression (several judges were bitten), and a basic wariness of people and other animals.The Bengal may look like a wild cat, but breeders insist that the Bengal is as lovably friendly and docile as any full-blooded domestic cat. Fanciers describe Bengals as playful, gregarious, and energetic cats that have a generous dose of feline curiosity and that want to be involved with their owners. Not intimidated by water, they will sometimes join their owners for a swim, as long as it?s on their terms.

Although show-quality cats must be four generations away (F4) from the leopard cat to be shown, previous generations of Bengals are sold as pets; therefore, it?s important to know what you?re buying when acquiring a Bengal. Before purchasing a second generation (F2) or third generation (F3) Bengal, be sure that the cat is free of temperament problems.The Bengal?s spots are aligned horizontally rather than in random or tabby configuration. Rosettes formed in a part-circle around a redder center is the preferred look. Emphasis is put on the contrast between the spots and the background color; the edges should be sharp and pattern distinct for a show-quality cat. In the marbled pattern, the markings are derived from the classic tabby gene, but the overall look is random, giving the impression of marble.

Bengals often possess a ?glitter gene? that gives the fur an iridescent glow, as if covered with warm frost. Three recessive coat variations have been developed: the snow leopard, the marbled, and the snow marbled. These types are still quite rare. 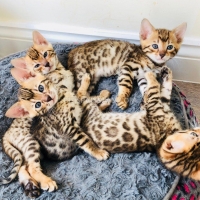 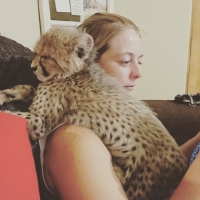 WELL TRAINED Cheetah, Lion cubs for sale
Bengal ISLAMKOT
We have very healthy and gorgeous lion and tiger cubs for sale to experienced and loving families... 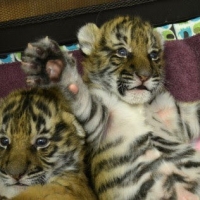 Young exotics cubs available male and female (...
Bengal ISLAMABAD
our cubs are very young ranges from 6 to 12 weeks old .all cubs are home raise,well trained and a...