Paw: Moderately long. Hind legs longer than forelegs. Medium-boned, well-muscled. Round paws.
Tail: Moderately long, thick, well-furnished, fluffy, or plumed. Hair must be at least 5 cm long.
Coat: Semilong to long, soft, silky hair without woolly undercoat. Ruff and britches well-furnished in winter. Pure white coat. Reddish-brown (auburn) or cream symmetrical markings at the base of the ears separated by a white blaze.
Fault: More than three colored patches on the body. No blaze on the face. Absence of coloring on the ears and tail.
History
All white with markings on the head and a lovely colored tail The Turkish Van is a more massive variety of Turkish Angora. It is named for the Lake Van region near Mount Ararat in eastern Turkey. This very old breed was reported as early as the 18th century, but it was not until 1955 that a British breeder named Laura Lushington imported Turkish Vans and truly began breeding them in Europe.
Behavior:
This particularly hardy, sturdy, very lively cat loves to swim. Although the breed was once reputed to be aggressive, selective breeding has made Turkish Vans friendly, especially toward other cats.

Cat Socialization:
It is a widly held misconception that cats are sneaky, shy, or aloof animals. Most feline shyness/aggression is a result of abuse, neglect, or poor socialization. A cat is unlike a dog in the sense that a dog will instantly trust you unless you have given it a reason not to.
A kitten is scared of people at first, but if it is handled and well cared for in the first 16 weeks, it will grow up into a sweet, loving cat that will enjoy human company.

Turkish Van Cat:Turkish Van is a rare and ancient breed that developed in central and southwest Asia, which today encompasses the countries of Iran, Iraq, southwest Soviet Union and eastern Turkey. They were first brought to England in 1955 as the Turkish cats, but this was later changed to Turkish Van to avoid confusion with the Turkish Angora.

The Turkish Van is extremely intelligent and imaginative. A Turkish cat is very lively, loving and demonstrative pet. They frequently chatter in answer to their owners, more often than not getting the last word in.Turkish Van cats often retrieve toy mice, balls and crumpled paper, and will exhaust their owners long before they tire themselves.

The Turkish Angora has a temperament and personality that is affectionate, inquisitive and intelligent companion. They are outgoing, strong-willed and want to be at the very center of their owners world.

The Turkish Angora is an affectionate, inquisitive and intelligent companion. They are outgoing, strong-willed and want to be at the very center of their owners world. In fact, they seem to expect their owners to be equally interested in what they are doing at any given moment. 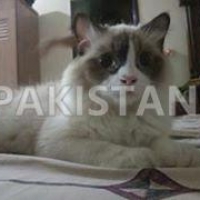 Ragdoll for sale
Turkish Cat Karachi
His name is Rio and hes almost 5 months old.He is a Ragdoll breed not a turkish on (ignore what... 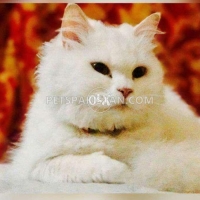