The Himalayan  is a medium to large sized cat, with short, stocky legs, a short tail, small rounded ears set well apart, and a round face with a perfectly flat profile.  The eyes are large and round and spaced well apart . The cat is heavy and the coat should cover the entire body; with a full tail, and a large ruff that frames the cat’s face. The fuller the coat on the body, the better. The bite must be level an undershot bite is a fault which is often seen in Persians.

The history of the Himalayan is well known and documented. Experimental breeding of Himalayans took place in the United States and England as far back as the early 1920's When the Persian and Siamese breeds were bred together, but actual recognition as a purebred cat did not come until 1957 in USA.  The name Himalayan because their coat patterns were similar to that of the rabbits and goats with the same colours found in the Himalayans in Asia.

These cats are sweet tempered, intelligent and generally very social and good companions.Because of their heritage from the Siamese cats they tend to be more active than Persians.

Himmies, as fanciers call them, are perfect indoor cat companions.  They are gentle, calm, and sweet tempered, but they possess a playful side as well. Like the Siamese, Himalayans love to play fetch, and a scrap of crumpled paper or a kitty toy will entertain them for hours. Himalayans are devoted and dependent upon their humans for companionship and protection

Along with their striking appearance , Himalayans have a wonderfull outgoing and engaging personality being extremely affectionate, playful and endearing.

Like many long-haired cats, Himalayans need to be brushed daily to keep their coats looking their best and healthier. In addition they may need their face wiped daily, depending on the cat. Bathing a Himalayan is also recommended by some breeders, to help reduce the amount of oil on the cat's fur and skin. The fur on the body of a Himalayan is white or cream, but the points come in many different colors. 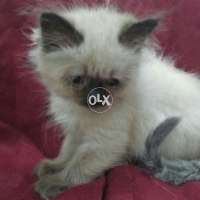 Cheetah Cubs, Lion Cubs and Tiger for sale
Himalayan ISLAMABAD
We are a breeder of a wide variety of exotic animals such as cheetah cubs, cougar cubs,jaguar c...