Description and Origion:   The Alexandrine Parakeet or Alexandrian Parrot (Psittacula eupatria) is a member of the psittaciformes order and of the psittacines family. The species is named after Alexander the Great, who is credited with the exporting of numerous specimens of this bird from Punjab into various European and Mediterranean countries and regions, where they were considered prized possessions for the nobles and royalty. 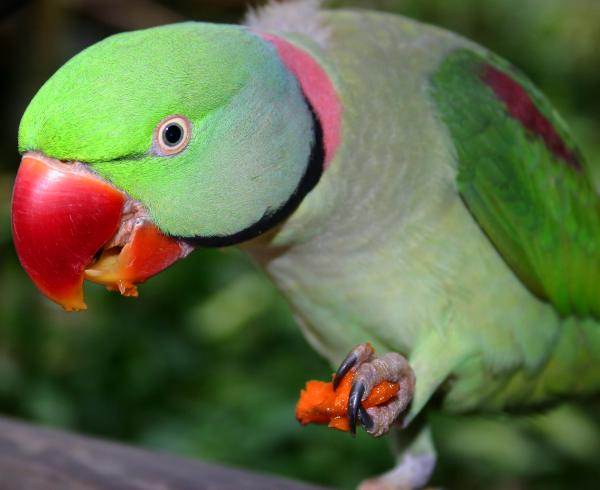 Also known as RAAW in local languages.East India to Hyderabad, Andhra Pradesh in the South,Afghanistan, Pakistan, North,central India, Nepal, Bhutan to Assam in Northeast India Sri Lanka are their origin.

Alexandrine Parrot is a member of the ring neck type of parrot. Alexandrine are recognized by the ring around thee neck thats why they are also called Ringed-Necked. Most common comes in Green in color but yellow, blue and white mutations have been achieved.They are also known for their gentle nature.

As a Pet:The Alexandrine Parrot is considered being the best for a great family pet, as they are playful, not nippy and a good talker.

The Alexandrine Parakeet is a large Parakeet species measuring 58 cm (23 in) in total length with a wing length averaging 18.9–21.5 cm (7.5–8.5 in). It is mainly green with a blue-grey sheen on its cheeks and napes, particularly in males. The abdomen is yellowish-green, the upperside of the middle tail feathers is blueish-green, the upperside of the external tail feathers is green while the underside of the tail feathers are all yellow. All Alexandrine Parakeets (irrespective of age, gender and/or sub-species) boldly display a maroon (reddish-brown) patch at the top of their wing coverts (commonly called 'shoulder' patch). The shoulder patch is seen in parakeets at their first feathering before fledging from their nests. The lower and upper mandible are red with yellow tips. The adult's irises are yellowish-white and the periopthalmic rings are light grey. The legs are grey except in the P. e. siamensis (Laos' or Siamese sub-species) where they are yellowish-grey. The sexes of these can be easily visually recoginized of adults males got red and black ring around the neck whereas females dont hav rings around the neck.

The bird is popular among aviculturists. It is ideal for outdoor aviaries and is generally very hardy, however it cannot tolerate temperatures less than 5 °C (41 °F). They breed well in aviaries. The parakeet is one of the oldest captive Parakeet species on the Eurasian continent. It gets its name from the legendary Emperor Alexander The Great, who had numerous specimens exported back to various Mediterranean countries by his legionaries. The parakeet has since then been popular among the nobles throughout the Empire's Anatolian, European and Mediterranean countries 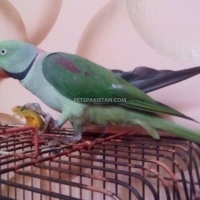 ALEXANDERINE RAW PARROTS FOR SALE
Alexandrine Parrot Karachi
Alexanderine Raw parrots for sale. Could be sold in pairs or single. These Alexderine Parrots are...

parrot and fresh fertile eggs
Alexandrine Parrot ABBAS NAGAR
Below is a list of Parrots and other exotic birds we currently have at the aviary: Ostrich birds...