American Shorthairs are big, muscular cats with large heads and round eyes. Adults generally weigh between eight and 15 pounds. American Shorthairs in more than 80 colors and patterns, including white with blue eyes and the popular silver tabby.

Apart from their renowned hardiness, American Shorthairs are noted for their even disposition, intelligence and adaptability. Their calm nature makes them ideal pets and gentle companions for children, cats and dogs. This is a friendly, inquisitive and versatile breed that is extremely popular. In fact, the American Shorthair is one of the most popular breeds of domestic cats in North America both in the show ring.

American Shorthairs are very strong and athletic. They have a natural intelligence, no doubt derived from the many years that their ancestors fended for themselves in the wild. They retain their native urge to hunt, to this day. They are active more so than reclusive, but they do not need a great deal of exercise to maintain their health or fitness. Regular play in the household with other companion animals and people, is almost always sufficient to keep the American Shorthair fit and firm.

American Shorthairs are descended from working cats. Like their ancestors, they are excellent hunters and are not suited to a "strictly indoor" lifestyle or apartment living.

American Shorthairs are a hardy breed with few health problems, cats from some lines are predisposed to hypertropic cardiomyopathy, a common heart disease.

American Shorthair goes all the way back to the Mayflower. English colonists brought cats with them from England to help keep rats and mice on the ship under control. When the settlers arrived on New England shores, the cats joined them in their new home.
In the early 1900 cats were imported to the U.S. from different countries and mixed with the first American cats. In an effort to save the original American cat a group of fanciers chose a handful of cats showing the characteristics of the “native” cat and began breeding them selectively. 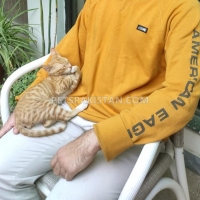 kittens adoption
American Shorthairs LAHORE CANT
i have 4 homeless kittens. their mother is a persian half breed who was thrown out by some heartl...