The Siamese is one of the oldest breeds of domestic cat and has a history as long and colorful as the cat itself. The Siamese is also (arguably) the most recognizable breed on the planet. These sleek cats with the beautiful baby blues and outspoken nature originated in Thailand (formerly Siam, thus the breed?s name), where they were treasured by members of royalty as companions and were thought to inherit the transmigrated souls of royalty en route to the hereafter.

Early stories and myths involving the Siamese are plentiful, including fanciful tales that account for the cat?s traits. One such story tells how sacred Siamese temple cats, charged with guarding a valuable vase, curled their tails around the vase and stared at it with such intensity that their eyes became crossed. Another story tells of Siamese cats appointed to guard princesses? rings: The cats kept the rings on their tails and the tail kinks developed to keep the rings from sliding off.

The Siamese is described and depicted in the Cat-Book Poems, a manuscript written in the city of Ayudha sometime between 1350 when the city was founded and 1767 when the city was burned by invaders. The illustrations in the manuscript clearly show cats with slim bodies and legs, and pale-colored coats with dark coloring on the ears, tails, and feet. The book describes these pointed cats as having red eyes, possibly because of the way, as any cat photographer will attest, that the breed?s eyes appear red when they reflect light.

No one is sure exactly when the Siamese was imported to Britain. The earliest documented account tells of a pair of Siamese cats given to the sister of the British consul general in Bangkok in 1884, who exhibited the cats the following year in London. However, Siamese cats were exhibited 13 years earlier (in 1871) in the first modern-style cat show at Sydenham, London?s Crystal Palace, where they were disparagingly described as ?an unnatural, nightmare kind of cat.?

Despite the bad press, the Siamese rapidly became popular among British fanciers. At that time, the Siamese were noted for their crossed eyes and kinked tails; these didn?t become conformation faults until later. The first British standard, written in 1892 and rewritten in 1902, described the Siamese as a ?striking-looking cat of medium size, if weighty, not showing bulk, as this would detract from the admired svelte appearance... also distinguished by a kink in the tail.?

The breed must have become used to posh dwellings from its years with royalty; reportedly, the first Siamese to reach America lived in the White House. This often told, if not particularly documented, story tells of a Siamese given to Mrs. Rutherford Hayes in 1878 by U.S. Consul David Stickles. Another story claims that the Siamese arrived in America in 1890, given as a gift to an American friend by the king of Siam.

The Siamese had certainly made the move to America by the early 1900s when Siamese cats began appearing in American cat shows. The breed rapidly clawed its way to the top of the cat fancy?s scratching post, and is now the most popular shorthaired breed in America, and third most popular breed overall, according to the CFA?s registration statistics (the Maine Coon nudged the Siamese out of second place in 1992).

Extreme breeders, on the other hand, believe that the Extreme body style is the original look, which became adulterated through dubious crosses in the early years. They are dedicated to preserving the natural, sleek elegance of the Extreme Siamese.

Extreme and Traditional Siamese fanciers continue to hiss at each other over the difference in style, and it?s difficult to say who is correct. The illustrations of the Siamese in the Cat-Book Poems show cats with long, slender legs and tails; however, the body type could be interpreted as either Extreme or Traditional, depending upon one?s point of view. Both sides agree on one thing, though: Siamese make wonderful companions. If you?re looking for a cat with personality, an impish nature, and a talent for conversation, both the Traditional and the Extreme will fit the bill. If you?re looking for success in the show ring, the Extreme is favored.

Some cats seem to think that a purr or a friendly rub speaks louder than words. Siamese are not of this school of thought and are known for their talent for communicating their ideas and desires clearly to their chosen humans. If you can?t be drawn into dialogue, they?re happy to keep up a running monologue for your enlightenment. No meaningless meows, these, but real attempts at communication, according to Siamese fans. To some cat lovers, who prefer their felines to be seen and not heard, the Siamese rasp (some would say yowl) can be a bit annoying. But Siamese worshipers wouldn?t have it any other way.

Determinedly social and very dependent upon their humans, Siamese crave active involvement in your life. Like Mary?s little lamb, they want to follow wherever you may go. Siamese can be unpredictable in their behavior and can appear aloof and disinterested, but it?s all an act. Siamese need to be treated with respect and patience and require lots of affection if they are to develop a close, caring relationship with their human companions. Siamese will pine if left too often alone.

Siamese come in four or more colors, depending upon the cat association to which you belong. The CFA recognizes four Siamese colors: seal, chocolate, blue, and lilac point (called frost in some associations). Solid blues and browns were well documented in the Cat-Book Poems, so it?s not surprising that Siamese cats possessing the recessive gene for the dilute factor, which changes seal to blue and chocolate to lilac, were appearing in Siamese lines early on. Siamese in red (also called flame) or cream point, tortie point (mottled mixtures of black and red or their dilute colors on the point areas, also called tortoiseshell), or lynx point (stripes of color on the point areas) are called Colorpoint Shorthair in the CFA, although most of the other cat associations consider these color variations of the Siamese. The red and cream colors were produced by foundation crossings between Siamese, Abyssinians, and red Domestic Shorthairs.

The Himalayan pattern, as the point-restricted style is called, is named after the rabbit that exhibits the same coat pattern. The color is restricted to the face mask, ears, legs, and tail, while the body remains a lighter color. The concentration of color is kept to the point areas by a temperature-controlled enzyme that creates greater depth of color at the parts of the body farthest away from the cardiovascular system. The cooler the environment, the darker the color becomes. Siamese kittens are born white, because of the warmth of their mother?s body, and develop their point color as they grow. 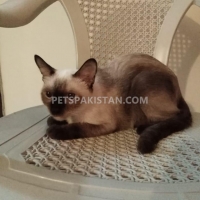 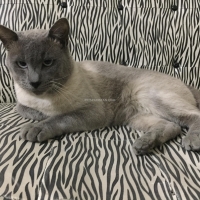 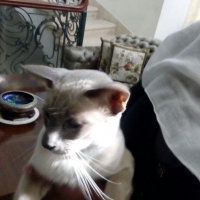