Although there are now two varieties of Burmese cats - American and European - the origins of these can be traced back to a single female. A cat called Wong Mau was brought from Burma to the US in 1930by  Joseph Thompson, an American Navy psychiatrist. Wong Mau was not a Burmese, but a Tonkinese who was bred with a Siamese cat.  Her litter contained kittens with the typical Simases pointed pattern as well as some darker, more lightly-pointed cats.

Burmese are intelligent, affectionate cats, vocal, active and playful. Burmese kittens are especially well known for their inquisitive nature. Some can be trained to retrieve toys or balls of paper. Most are outgoing and accept strangers well.Some breeders claim the torti coloured Burmese are especially outgoing, mischievous and rascally.  They have earned the affectionate nickname of naughty torties.As there have been cases where individual Burmese have acted aggressively, reputable breeders urge prospective buyers to inspect parents of a kitten for any aggressive tendencies.

A varied diet such as canned food , cheese, some mince and dried biscuits should be adequate. They should not be fed solely on dry food as it  may cause kidney problems.

urmese cats are extremely intelligent cats which can sometimes lead to Burmese  behavioral problems. They can be a demanding breed of cat and they  much enjoy human interaction. Most Burmese cats live quite happily with their family and never cause any problems at all, but occasionally Burmese cat behavioural problems will become a real issue.

Burmese will scratch the furniture if not provided with a scratching post and some breeders trim their claws. They are known climbers and a well aimed water pistol should be used to dissuade cats from climbing curtains..

The Burmese likes to explore the environment. Anything that is mechanical and moves makes a good game for the Burmese. They understand door handles quickly, and the owners often have to fit door levers upside down. Height is not deterrent. Very muscular the Burmese loves to jump on the tops of doors  and surprise unwary visitors. Nevertheless, 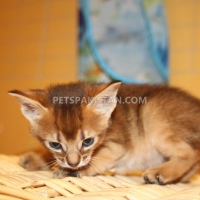