The African Grey is primarily ... grey. There is a white area around the eye, and a red tail.

These birds depict different shades of gray colors. They have dark gray wings  and a pale gray rump. A featherless rim of skin around the eyes is whitish to light gray. Their head and neck feathers have paler margins, giving that part of the body a scalloped appearance.

The African Gray Parrots are native to primary and secondary rainforest of West and Central Africa.

African Grey Parrot as a Pet:

The African Gray Parrots are extremely talkative, intelligent, and sensitive birds. These birds are considered to be the best talkers of all the birds. To calm a screaming African Gray Parrot, fly them on your finger or take them for a walk around the house.

Every night in Gabon  vast flocks of thousands of  Grey Parrots gather at traditional roosting sites  in river valleys where the trees are often over water far from their feeding areas.  In other regions, the roosting flocks are smaller but it is common to find over 100 birds in a single tree.

They communicate with a variety of high-pitched screams and loud clear whistles in flight and when perched.  Before settling down for the night loud whistles and raucous shrieks can be heard and at sunrise, they chase through the trees performing curious acrobatics before flying off to feeding areas.  .

In general, they are a shy bird, rarely allowing close approach; however locally they become quite tame.  The African Grey Parrot is renowned for its remarkable powers of vocal mimicry. .

They feed on seeds, nuts, fruits and berries gathered mostly in the treetops.  When feeding they usually climb from branch to branch rather than flying  and will hold the fruit or nut in its foot to eat.

Grey Parrots are especially fond of eating the outer oily flesh of the oil-palm nut. They also prefer the red fruits of  Cola tragacantha.

Experts regard the African Grey Parrot as one of the most intelligent birds. Their talking has been determined to be a learned skill, and not mimicry. They have been found to speak in sentences, and are able to physically manipulate objects with a purpose.

For breeding African grey parrots  first of all you ll need to acquire a true pair. Identify the sex of your birds before you set them up for breeding. That can be done with DNA sexing if you do not want any fuss. However, surgical sexing is recommended since it enables the physical examination of the birds' sexual organs and the detection of any potential diseases. As in other surgical procedure, this involves the acceptance of risk.

Age of breeding:Most domestically raised African Greys will be matured enough for breeding at about five years of age.

Breeding cage:. The ideal breeding cage has the following dimensions: 4'(w) x 2'(d) x 5'(h). African Greys breed quicker in this type of dimension than in larger flights and many breeders agree to this phenomenon.

Ideal perch: The ideal perch measures 2' x 4'. During the breeding cycle, the birds will do a lot of wood chewing from the perch. Use a non-pressure treated wood .

You are now ready to start breeding your African Grey

Larger than second one about 13 inches long and light grey in color with dull cherry red tail and black beak. 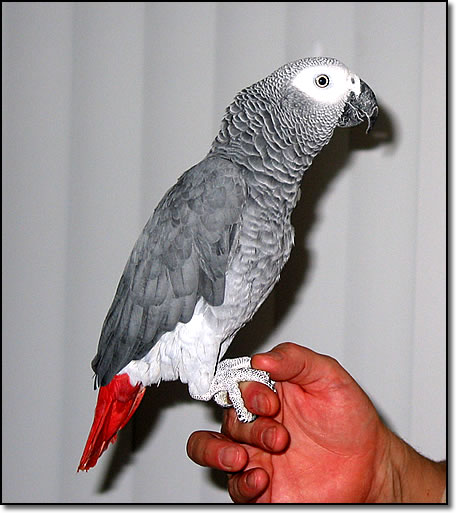 The Congo grey parrot is found on the islands of Prínciple and Bioko and is distributed from south-eastern Ivory Coast to Western Kenya, Northwest Tanzania, Southern Democratic  Republic of Congo (DRC) and Northern Angolo. In aviculture, it is often called a "CAG". 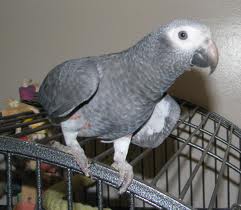 As pets Timnehs begin learning to speak earlier than Congos, and are often said to be less nervous around strangers and novel situations.

Adorable hand tamed African grey parrots for sale.
African Grey Parrot LAHORE
Well tamed parrots. They have all been vaccinated, love human company and can get along with oth... 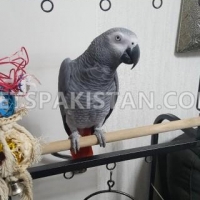