Description: A cockatoo is one of about 20 species of bird belonging to the family Cacatuidae, one of the two families making up the order Psittaciformes, which includes all parrots. Like other members of the Psittaciformes, cockatoos have a characteristic curved beak shape  a zygodactyl foot  and many other common features.

In natural habitat, cockatoos typically feed on various seeds, nuts and fruits, such as papaya, durian, langsat and rambutan. As they are also feed on corn growing in fields, they do considerable damage and are, therefore, considered crop pests by farmers.

They also eat large insects, such as crickets and skinks.

Captive birds are usually provided a parrot mix containing various seeds, nuts and dried fruits & vegetables. Additionally, they need to be offered lots of fresh vegetables, fruits and branches for chewing and entertainment.

Social behaviour: High socialization need has a profound affect on cockatoo behavior. If they don't get the necessary attention and interaction they can quickly become bored. A bored cockatoo will often develop bad habits like screaming and feather plucking, and these habits are extremely difficult to break.

On most species of Cockatoo the eye iris of the female will become red to red brown after about two years. This helps to determine the sex of the bird.
In these birds, the sex must be determined by either a surgical probe, endoscopy, or by a DNA testing. Endoscopy can be done by many veterinarians. DNA testing is done usually with a blood sample or a few plucked feathers that are sent to be diagnosed in a lab.

Cockatoos only breed once a year   usually between December and March, when vegetation growth is at its peak.

As part of the courtship behavior the male ruffles his feathers, spreads his tail feathers extends his wings and erects his crest. He then bounces about. Initially, the female ignores or avoids him, but  provided he meets her approval  will eventually allow him to approach her.

Once he is accepted as a mate, they will both preen each other's head and scratch each other around the tail. This serves to strengthen their pair bond. Eventually, the male will mount the female and perform the actual act of mating by joining of the cloacae. For bonded pairs, this ritual is much shorter and the female may even approach the male. Pairs leave their group and find a nesting spot in a tree.

Cockatoos form a close bond that lasts for a lifetime. If they are separated, they may slip into a deep depression. In absence of a "true" mate, they may accept a caretaker as its mate.

Nesting and  Raising of the Young

Cockatoos generally nest in tree cavities of the largest trees, about 16 - 100 ft (~5 to 30 meters) above the ground.

The average clutch size consists of 2 (occasionally 3) eggs which are incubated for about 30 days. The male and the female share the responsibility of incubating the eggs until they hatch. Generally they raise only one of the chicks, which in most cases is the first one that hatches. However, if that chick is malformed or weak, they will raise the second one.

With its soft-textured white and salmon-pink plumage and large, bright red and yellow crest it is generally recognised as the most beautiful of all cockatoos.

2: Slenderbilled cockatoos:Slender-Billed Cockatoos are large birds  measuring between   18-20  inches in length from the beak to the tip of the tail feathers.

3:Citron cockatoos:Most Citron Cockatoos are between 13  & 15 inches in length from the beak to the tip of the tail feathers. 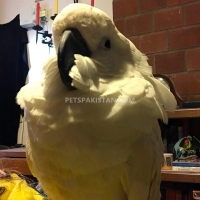 Cockatoos
Cockatoos ISLAMABAD
âWe sell birds and eggs of the following {we own our private aviary}: Ostrich, Macaws, African Gr... 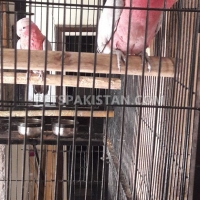